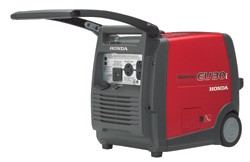 The New EU30iu Handy is the lightest and most portable 3000 watt generator we have ever made. In an all-new design the EU30iu Handy features built-in wheels, fixed handles and a folding handle to allow for easy movement of the generator.

The EU30iu Handy features a microcomputer-controlled sinewave inverter that guarantees commercial-quality electricity – making it ideal for use with frequency sensitive electrical equipment such as computers.

It also uses a high-speed multi-point alternator that is integrated into the engine itself. This Honda developed technology reduces the overall weight and size by 25% to 50% compared to similarly classed conventional models, making it very portable.

The EU30iu also features an Eco-throttle which adjusts the engine speed to meet the load demand. This increases fuel economy whilst also reducing noise as the engine is not required to run at full capacity unnecessarily.

30iu Handy generators to be quickly and easily linked using a special parallel connection cable to double your output to 6Kva. With low operating noise level and enough power to be used in a wide range of home, recreational and professional uses, the EU30iu Handy incorporates all of Honda’s portable power technology